‘Novels are my first love'

‘Novels are my first love'

Dalits: Such a long journey

Dalits: Such a long journey

Posted by Ravikumar at 8:14 AM No comments:

The Hindu : News / National : Tamil Nadu MP stages fast
Posted by Ravikumar at 11:51 AM No comments:

The Hindu : States / Kerala : ‘Serious damage’ to masonry of Mullaperiyar dam detected
Posted by Ravikumar at 2:55 AM No comments:

A Linguistic Interpretation of KaTi Jokes in Tamil Prof. K.Nachimuthu

The Hindu : News : Tamil Podcasts
Posted by Ravikumar at 11:09 PM No comments:

Posted by Ravikumar at 7:36 PM No comments:

Many Ramayanas: A Protest Letter by Paula Richman 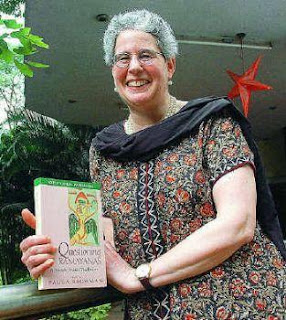 We have learned with shock and dismay that Oxford University Press
India has formally apologized to the individual who brought suit
against OUP for publishing A. K. Ramanujan's "Many Ramayanas." OUP
India's lawyers have stated in court, "We are instructed to intimate
to our client through you and state that our client have long
earlier stopped selling the book, "Many Ramayanas: The Diversity of
A Narrative Tradition in South Asia", nor have they any plans to
reissue/re-publish the book." And further: "Our client further wish
to assure your client that as publishers of long standing and
repute, it has been their conscious endeavour to respect the
plurality of Indian culture in all publishing activities which they
undertake and very much regret that the essay in question has
inadvertently caused your client distress and concern." In addition,
OUP India has, it appears, subsequently withdrawn from the market
Ramanujan's Collected Essays, in which "Many Ramayanas" also
appears, and has assured Delhi University that it will not keep the
book in print, a pledge that enabled the university's vice-
chancellor to overrule his own committee who had argued for
retaining Ramanujan's essay on the syllabus of the History department.

The scholars who have signed this letter to you, many of us former
colleagues or students of Ramanujan, but also authors who have
published with OUP Oxford, New York, or Delhi, want to express our
deep consternation at OUP India's self-abasement in court. We are
also fully aware that the Ramanujan case is only the most recent in
a series of shocking acts on the part of OUP India--including the
suppressing or pre-censoring of scholarly books--that are inimical
to the open exchange of ideas, the lifeblood of scholarship.

We ask that OUP withdraw its court apology, publicly state that it
is committed to the right of scholars to publish their work without
fear of suppression or censorship, and demonstrate this commitment
by reprinting at once Ramanujan's Collected Essays.

If you unwilling to do these things, and thereby effectively attempt
to bury Ramanujan's book, we demand that you publicly relinquish all
rights to his work and return them to the original copyright
holders, so that this scholarship can be published by another press
that understands the importance of freedom of expression, to say
nothing of courage in the face of fanaticism.


Posted by Ravikumar at 7:30 PM No comments: