“Tamil contributed to Sanskrit too”

Language talkOne of the speakers at the Tamil and Sanskrit conference here on Saturday— Photo: T. Singaravelou
Speaking against the popular belief that only the language Tamil borrowed usages and terms from Sanskrit, writer Indira Parthasarathy said there are many words in Sanskrit that were taken from Tamil.
Even the word ‘Vishnu’ comes from the Tamil word ‘Vin,’ he said speaking at the Tamil and Sanskrit conference here on Saturday.
Delivering the keynote address at the function, Tamil writer A.A. Manavalan said Sanskrit is a static language and has not changed through the years.
Even the Bhagavat Gita was added to the Mahabharatha at a later stage, he said.
It is possible that even Panini was influenced by Tholkappian’s Tamil, he said.
The Tamil and Sanskrit conference was organised by Manarkeni and featured 13 scholars including C.T. Indra, K. Rajavelu and others who presented papers through the day.
More In: TAMIL NADU | NATIONAL
Printable version | Sep 30, 2012 11:20:59 AM | http://www.thehindu.com/todays-paper/tp-national/tp-tamilnadu/tamil-contributed-to-sanskrit-too/article3951028.ece
© The Hindu
Posted by Ravikumar at 10:53 PM No comments: 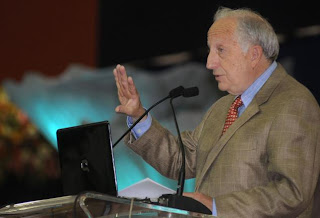 Posted by Ravikumar at 10:13 PM No comments: