By Katherine Baldwin
LONDON, June 13 (TrustLaw) - Policies that promote gender equality, safeguards against violence and exploitation and access to healthcare make Canada the best place to be a woman among the world’s biggest economies, a global poll of experts showed on Wednesday.
Infanticide, child marriage and slavery make India the worst, the same poll concluded.
Germany, Britain, Australia and France rounded out the top five countries out of the Group of 20 in a perceptions poll of 370 gender specialists conducted by TrustLaw, a legal news service run by Thomson Reuters Foundation.
The United States came in sixth but polarised opinion due to concerns about reproductive rights and affordable healthcare.
At the other end of the scale, Saudi Arabia - where women are well educated but are banned from driving and only won the right to vote in 2011 – polled second-worst after India, followed by Indonesia, South Africa and Mexico.
“India is incredibly poor, Saudi Arabia is very rich. But there is a commonality and that is that unless you have some special access to privilege, you have a very different future, depending on whether you have an extra X chromosome, or a Y chromosome,” said Nicholas Kristof, journalist and co-author of "Half the Sky: Turning Oppression into Opportunity for Women Worldwide", commenting on the poll results. 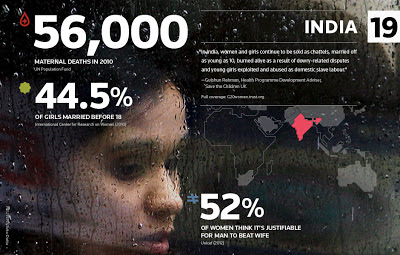 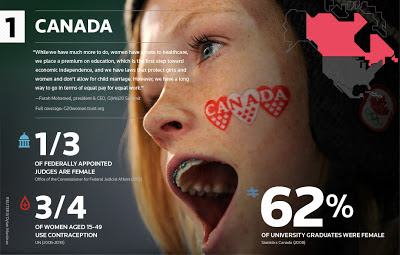 Posted by Ravikumar at 2:27 AM