“Nothing offensive in Arundhati's speech”

CHENNAI: Viduthalai Chiruththaigal Katchi (VCK) leader Thol. Thirumavalavan has strongly condemned what he termed the Central government's attempts to stifle the voice of writer and activist Arundhati Roy for her stand on Kashmir.
‘Most want independence'
“It is a shame that the Congress government is doing this to satisfy the Bharatiya Janata Party,” Mr. Thirumavalavan said in a statement. He noted that it was a well-known fact that most of the people of Kashmir demanded independence.
Their agitation intensified only after the Shopian incident in which women were brutally raped and murdered. “I was part of the all-party delegation which visited Kashmir under the leadership of the Home Minister. Many Kashmiris openly demanded ‘freedom from the Indian occupation' and declared it before our delegation,” he said. 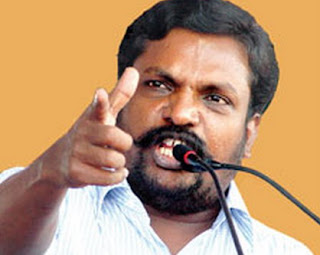 Omar's remark
Even the Jammu Kashmir Chief Minister Omar Abdullah recently remarked that the State had only acceded to, and not merged with the Indian Union, he pointed out.
Mr. Thirumavalavan recalled his efforts to push for greater autonomy for the people of Kashmir and immediate repeal of the ‘Armed Forces Special Powers Act' during the two meetings with United Progressive Alliance chairperson Sonia Gandhi and Home Minister P. Chidambaram.
Timely intervention
“I have read the reported speech and the statement issued by Ms. Arundhati Roy. I find nothing offensive or seditious in it. It is only an echo of the aspirations of the Kashmir people and the democratic intellectuals of our country. It shows only the democratic spirit of a public intellectual. I appreciate Ms. Roy for her timely intervention in breaking the icy silence on Kashmir problem,” he added.
While pledging the support of the VCK for Ms. Roy, he also went on to invite all the democratic forces and intellectuals of the nation to stand with her in her fight for freedom of expression.
© Copyright 2000 - 2009 The Hindu
Posted by Ravikumar at 10:58 AM